Fenians, Freedmen, and Southern Whites: Race and Nationality in the Era of Reconstruction 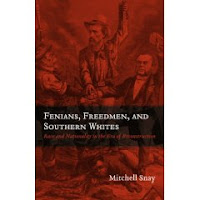 From the publisher:
After the American Civil War, several movements for ethnic separatism and political self-determination significantly shaped the course of Reconstruction. The Union Leagues, which began during the war to support the northern effort, spread to the South after the war and mobilized African Americans to fight for their political rights and economic security. Opposing the Leagues was the Ku Klux Klan, which used intimidation and violence to maintain the political and economic hegemony of southern whites. Founded in 1858 as the Irish Revolutionary Brotherhood, the Irish-American Fenians sought to liberate Ireland from English rule.

Mitchell Snay provides a compelling comparison of these seemingly disparate groups in Fenians, Freedmen, and Southern Whites, illuminating the contours of nationalism during Reconstruction. Despite their separate and often opposing goals, the Fenians, Union Leagues, and the Klan, Snay reveals, shared many characteristics.

To various extents, they were secret societies that sought to advance their mission through both political and extra-political means. Both the League and the Klan employed elaborate rites of initiation and secret passwords common to nineteenth-century fraternal organizations. They also shared a similar political culture of secrecy, conspiracy, and countersubversion. All three groups were quasi-military in structure and activities and shared a desire for the control of land.

Among the three organizations, Snay shows, the Fenians provide the clearest case of nationalist aspirations along the lines of ethnicity, though the rise of racial consciousness among both southern whites and blacks also might be seen as expressions of ethnic nationalism. According to Snay, the political culture of Reconstruction encouraged the nationalist ambitions of these groups, but channeled their separatist impulses along civil rather than ethnic lines by focusing on questions of freedom, citizenship, and suffrage. In addition, the Republican emphasis on color-blind equality limited overt expressions of national identities based solely on ethnicity or race.