Courage Under Fire: Profiles in Bravery from the Battlefields of the Civil War 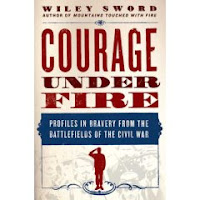 From the publisher:
Through diaries and letter written on the battlefield, in camps, and on the deathbeds of soldiers from north and south, Wiley Sword writes about more than the Civil War. He writes of the complex working of a soldier’s mind coming to grips with life and death in a time when his country was at war with itself.

On Aug. 3, 1864, Illinois Lieutenant Frank Curtiss was ordered by his commander to take the 127th Illinois Infantry into a charge of the fortified Rebel lines. He knew certain death was in store for him and his men. He also knew little tactical superiority would be gained for lives lost and refused to do it.

Confederate Brigadier General Patrick Cleburne, one of the South's greatest military tacticians, left diaries showing he was striving to refine his methods to save lives while winning battles.

And then there is the Rhode Island Regiment's Major Sullivan Ballou who, in 1861 on the eve of the battle of Bull Run who wrote of courage and dedication to his cause.

Wiley Sword constructs a picture of the military mind that still resonates in today's wars.

WILEY SWORD is the author of several Civil War histories, including Mountains Touched with Fire and Southern Invincibility. He is a Fletcher Pratt Prize Award-winner and has been nominated numerous other prizes, including the Pulitzer. He lives in Bloomfield Hills, Michigan.