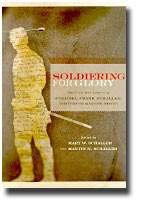 From the publisher:
Confederate colonel Frank Schaller lived a life of grand ambition, driven to attain rank, fortune, a good marriage, and some measure of redemption in the eyes of his German family. Edited by Mary W. Schaller and Martin N. Schaller, his correspondence from the 1860s follows his battlefield experiences, his machinations for advancement, and his courtship of Sophie Sosnowski of Columbia, South Carolina.

Schaller emigrated from Germany to the United States in 1855 and began the career as a military science instructor that would lead him to North Carolina and the Hillsborough Military Academy in 1861. His training in Germany and his combat experience with the French army in the Crimean War made him a candidate for quick advancement once the Civil War began. From the time of North Carolina's secession in 1861 until his being wounded at Shiloh in April 1862, Schaller advanced rapidly from lieutenant to colonel. But after Shiloh his consistent—and somewhat conspicuous—medical complaints kept him from combat while he worked to maintain his rank as regimental commander of the Twenty-second Mississippi Infantry and pursue marriage into a prominent family.

Though largely a peripheral figure in the great conflict, Schaller reveals much in his correspondence about military actions and the inner workings of the Confederate officer corps. The critical views of this disciplined European military commander on the quality and training of his American volunteer soldiers is particularly telling. He recounts his firsthand perspectives on the Battle of Shiloh, the retreat from Nashville, the Battle of Fredericksburg, and the defeat at Gettysburg. His letters to Sophie Sosnowski also detail the nature of courtship practices in the war-torn South.

The story is completed in the editors' epilogue as they chronicle Schaller's marriage to Sosnowski, resignation from the Confederate ranks, and relocation to Athens, Georgia, where he taught briefly and then resumed his odyssey until his death in 1881. Schaller's letters portray life and culture in the Confederacy as witnessed by an immigrant eager to find personal success and glory in America.

Mary W. Schaller is the author or editor of fifteen previous books and plays, including Papa Was a Boy in Gray: Memories of Confederate Veterans Related by Their Living Daughters.

A descendant of Frank Schaller, Martin N. Schaller is a retired U.S. Navy officer and technology executive. The Schallers live in Burke, Virginia.

From CWBN:
This is a very well written (and edited) collection featuring the life struggles of a Jewish German Rebel officer whose early career embraced the CSA's Polish Brigade. Considering that one of the co-authors here is descended from Frank Schaller, the tone of this work is refreshingly critical. Schaller is rarely taken at his own self-worth and yet the reader develops a sympathy and curiosity that keeps the pages turning. Well worth a piece of your leisure-reading schedule.