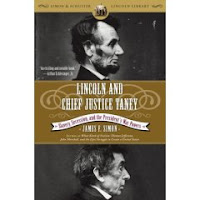 From the publisher:
The clashes between President Abraham Lincoln and Chief Justice Roger B. Taney over slavery, secession, and the president's constitutional war powers went to the heart of Lincoln's presidency. James Simon, author of the acclaimed What Kind of Nation -- an account of the battle between President Thomas Jefferson and Chief Justice John Marshall to define the new nation -- brings to vivid life the passionate struggle during the worst crisis in the nation's history, the Civil War. The issues that underlaid that crisis -- race, states' rights, and the president's wartime authority -- resonate today in the nation's political debate.

Lincoln and Taney's bitter disagreements began with Taney's Dred Scott opinion in 1857, when the chief justice declared that the Constitution did not grant the black man any rights that the white man was bound to honor. In the famous Lincoln-Douglas debates, Lincoln attacked the opinion as a warped judicial interpretation of the Framers' intent and accused Taney of being a member of a pro-slavery national conspiracy.

In his first inaugural address, President Lincoln insisted that the South had no legal right to secede. Taney, who administered the oath of office to Lincoln, believed that the South's secession was legal and in the best interests of both sections of the country.

Once the Civil War began, Lincoln broadly interpreted his constitutional powers as commander in chief to prosecute the war, suspending the writ of habeas corpus, censoring the mails, and authorizing military courts to try civilians for treason. Taney opposed every presidential wartime initiative and openly challenged Lincoln's suspension of the writ of habeascorpus. He accused the president of assuming dictatorial powers in violation of the Constitution. Lincoln ignored Taney's protest, convinced that his actions were both constitutional and necessary to preserve the Union.

Almost 150 years after Lincoln's and Taney's deaths, their words and actions reverberate in constitutional debate and political battle. Lincoln and Chief Justice Taney tells their dramatic story in fascinating detail.

From the critics:
Simon's focus on Lincoln and Taney makes for a dramatic, charged narrative and the focus on presidential war powers makes this historical study extremely timely. - Publishers Weekly

From CWBN:
This short book, an easy read, will best be enjoyed by readers who know little of Lincoln or Taney. The parallel stroytelling structure, alternating biographical chapters, will wear thin for those already versed in Lincoln's background. The book is an enjoyable read, trading analytical depth for drama and color.

This is the first paperback edition of a hardcover book.