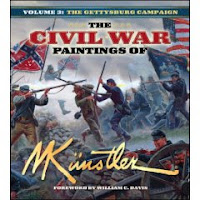 From the publisher:
For nearly thirty years, Mort Kunstler has focused his considerable artistic talent on interpreting the Civil War. In crafting his work to reflect poignant moments or critical instances of the conflict, he has turned to leading historians and scholars -- such as Henry Steele Commager, James McPherson, William C. Davis, and James I. Robertson Jr. -- for informative details that he has then translated on canvas to create an indelible image of this defining ordeal in America's history. More than 160 of these images -- supplemented by preliminary sketches, early studies, and photographs of works in progress -- are the basis for the four volumes in this series.

Kunstler has also explored the human side of this national struggle. Thus he has produced thoughtful studies of leaders at decisive moments, instances of daily camp life for the soldiers, and those early romantic notions that it would be a bloodless war, predicated on the belief that a show of inner strength would prevail.

Historian James I. Robertson Jr. recently noted, "Among the handful who truly sense the human, indelible element of that war is Mort Kunstler. That alone goes far in explaining why he is the premier Civil War artist of our time, if not of all time....His subjects are always widely appealing to the eye and to the mind. [He] pursues accuracy to an extent that would make some historians blush."

In the past twenty years, Kunstler's portfolio has been published in twelve books, including companion pieces for the epic films Gettysburg and Gods and Generals. These paintings are reproduced here along with a lively history of the war.

Mort Kunstler is the reigning dean of American historical artists. No other artist has illustrated so many events in America with such authenticity and drama, from cave-dwelling Native Americans to the space program. He has had numerous one-man exhibitions at galleries such as the Hammer Galleries in New York City. He also was the subject of a one-hour special on A&E Network's Time Machine. His previous books include Images of the Civil War, Gettysburg, Jackson and Lee, and The Civil War Art of Mort Kunstler. He lives in Oyster Bay, New York.