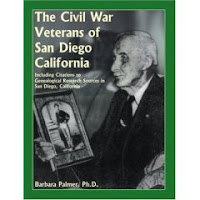 From the publisher:
A study was conducted to indentify Civil War veterans who migrated to San Diego, California, after the war. Nearly 2,000 veterans were identified, mostly Union veterans from the Northern States. For example: 281 were born in New York, 251 in Ohio, 172 in Pennsylvania, and 112 in Indiana.

This book includes tombstone inscriptions and cemetery office records for the veterans and their wives, where available. Veteran intake records for the Heintzleman and Datus Coon G.A.R. posts give city or state of birth, Civil War unit and rank, length of service, where discharged, date of application to the San Diego G.A.R., age at time of application, occupation, death dates, and burial locations, where available. An all name index includes state of birth and state of the veteran's first enlistment (which often varied), allowing a determination of individual migration patterns over time. A guide to research in San Diego includes sources for military, church, census, vital, probate, cemetery, and other records. Cemetery histories and maps are also included.