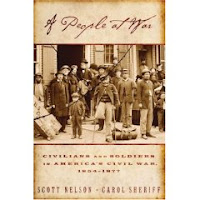 by Scott Nelson and Carol Sheriff

From the publisher:
A People at War refutes the popular belief that during the American Civil War the citizenry bent to the will of the nation's great military and political leaders. Capturing how the war rocked the lives of all segments of society, it argues that conflicts off the battlefield splintered society in the North and South, creating widespread chaos, guerrilla warfare, urban riots, and unprecedented public outcry which drove the actions of the leaders who now define the era: Abraham Lincoln, Jefferson Davis, Ulysses S. Grant, and Robert E. Lee.

The book also brings to life the full humanity of the war's participants--from women behind their plows to their husbands in army camps; from refugees from slavery to their former masters; from Mayflower descendants to freshly recruited Irish sailors. It describes how people confronted their own feelings about the war itself, and how they coped with emotional challenges (uncertainty, exhaustion, fear, guilt, betrayal, grief) as well as physical ones (displacement, poverty, illness, disfigurement). In addition, the authors examine how the West--and the dreams the Easterners attached to it--played a crucial role in a supposedly North-South conflict. A People at War stresses the war years, but also casts an eye at the tumultuous decades that preceded and followed. It is an ideal resource for American History courses focusing on the Civil War and Reconstruction.

"Bold, synthetic, and creative, A People at War presents the history of the Civil War in a way that is at once sweeping in scope and visceral in register. To the chronicle of failed compromises and hallowed battles, Nelson and Sheriff add a framing sense of the social and economic spaces of the nineteenth-century, a revisionary emphasis on the global and imperial dimensions of the Civil War era, and a pointillist attention to the hopes and terrors of the ordinary people black, white, and Indian, women and men who lived and died on wars leading edge." --Walter Johnson, Harvard University