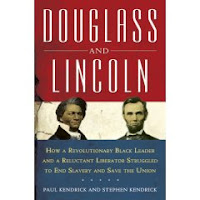 From the publisher:
Frederick Douglass and Abraham Lincoln had only three meetings, but their exchanges profoundly influenced the course of slavery and the outcome of the Civil War.

Although Abraham Lincoln deeply opposed the institution of slavery, he saw the Civil War at its onset as being primarily about preserving the Union. Frederick Douglass, himself a former slave, by contrast saw the War’s mission to be the total and permanent abolition of slavery. And yet, these giants of the nineteenth century, despite their different outlooks, found common ground, in large part through their three historic meetings.

Lincoln first invited Douglass to the White House in August 1862. Well-known for his speeches and his internationally read abolitionist newspaper, Douglass laid out for the president his concerns about how the Union army was discriminating against black soldiers. Douglass, often critical of the president in his speeches and articles, was impressed by Lincoln’s response. The following summer when the war was going poorly, the president summoned Douglass to the White House. Fearing that he might not be reelected, Lincoln showed Douglass a letter he had prepared stating his openness to negotiating a settlement to end the Civil War—and leave slavery intact in the South. Douglass strongly advised Lincoln against making the letter public. Lincoln never did; Atlanta fell and he was reelected. Their final meeting was at the White House reception following Lincoln’s second inaugural address, where Lincoln told Douglass there was no man in the country whose opinion he valued more and Douglass called the president’s inaugural address “sacred.”

In elegant prose and with unusual insights, Paul and Stephen Kendrick chronicle the parallel lives of Douglass and Lincoln as a means of presenting a fresh, unique picture of two men who, in their differences, eventually challenged each other to greatness and altered the course of the nation.

Paul Kendrick is a Presidential Arts Scholar at George Washington University. His father Stephen Kendrick is the senior minister of First and Second Church in Boston. They are the authors of Sarah’s Long Walk: The Free Blacks of Boston and How Their Struggle for Equality Changed America.