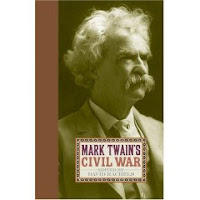 From the publisher:
Had there been no Civil War, the eminent American author known as Mark Twain would likely have spent his life as Sam Clemens, the Mississippi River steamboat pilot. When the war came and the steamboats stopped running, Clemens served two weeks in the Missouri State Guard before he fled west to begin his career as a writer.
After the Civil War dramatically altered the course of Twain's life and career, his thoughts and stories about the war were published widely. Mark Twain's Civil War marks the first occasion for readers to survey the full range of his Civil War writings in one volume. The book contains autobiographical pieces as well as fiction, appealing to both Twain enthusiasts and Civil War scholars.

David Rachels, associate professor of English at the Virginia Military Institute, is the editor and coeditor of several books, including The First West: Writing from the American Frontier, 1776-1860.

From CWBN:
The exact day of release for this December title is unknown.