George W. Alexander and Castle Thunder: A Confederate Prison and It's Commandant 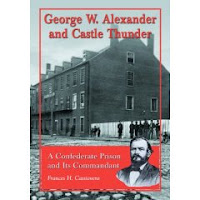 From the publisher:
Captain George W. Alexander was a controversial figure in Richmond during the Civil War, honored as a hero and condemned as a cruel prison superintendent. He was appointed Provost Marshall and put in charge of Castle Thunder in 1862, after escaping imprisonment at Fort McHenry. At his Confederate prison in Richmond, he oversaw prisoners of all types, including Confederates, women, slaves, Federal deserters, and spies.

This biography traces his entire life from his career in the U.S. Navy and the voyage with Commodore Perry to Japan, to his hiding in Canada after Lee’s surrender, to his editorship of Washington DC’s Sunday Gazette and death in 1895. The main body of the text concentrates on Alexander’s time at Castle Thunder, but the book also explores the evolution of the prison system and the provost marshall’s department, touching on unusual prisoners and escape attempts. Appendix 1 is a partial list of prisoners at Castle Thunder and when, where, and why they were arrested. Appendix 2 is a transcript of the court martial of Private John R. Jones. Appendix 3 lists prisoners sent from Camp Holmes and appendix 4 is a report of Alexander as Assistant Provost Marshall. Appendix 5 is a pamphlet published by the Republican Party National Committee; it struck at the Democratic Party by scorning its "military prison keepers."