Winter Lightning: A Guide to the Battle of Stones River 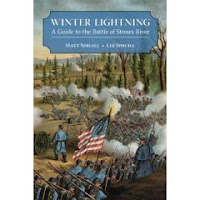 by Matt and Lee Spruill

From the publisher:
From December 31, 1862, to January 2, 1863, one of the Civil War's bloodiest battles raged as more than 42,000 Union troops led by General William S. Rosecrans met 37,000 Confederates under General Braxton Bragg near the small town of Murfreesboro, Tennessee. The Battle of Stones River, which the Union declared as a victory, significantly boosted Union morale in the Western Theater.

Stones River has received scant attention in comparison to other battles, such as Gettysburg, Shiloh, and Vicksburg, especially in the publication of tour guidebooks. Winter Lightning is the only battlefield guide to Stones River available in print. Designed as a step-by-step primer for visitors to the Stones River National Battlefield, it offers a comprehensive, “you are there” overview of the important events that took place during the battle.

Winter Lightening follows a sequential series of twenty-one “stops” to guide the visitor through the battlefield over the exact routes used by both armies, offering informative details on what happened at key points along the way. The guide divides the battle into three segments: the west flank, the center, and the east flank. This approach allows visitors to follow the battle in its entirety or in any order they wish. Detailed maps and extensive primary material including commentary by commanders, letters, and other fascinating sources further enrich the visitor's experience.

Matt Spruill is a retired U.S. Army colonel and formerly a Gettysburg Licensed Battlefield Guide. He is the author of Guide to the Battle of Chickamauga, Storming the Heights and Echoes of Thunder. Lee Spruill, a paramedic and fireman, is a major in the U.S. Army Reserve and has just returned from a tour of duty in Afghanistan.