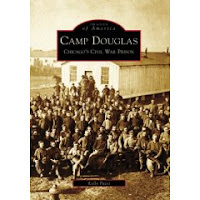 From the publisher:
Thousands of Confederate soldiers died in Chicago during the Civil War, not from battle wounds, but from disease, starvation, and torture as POWs in a military prison three miles from the Chicago Loop.

Initially treated as a curiosity, attitudes changed when newspapers reported the deaths of Union soldiers on southern battlefields. As the prison population swelled, deadly diseases—smallpox, dysentery, and pneumonia—quickly spread through Camp Douglas. Starving prisoners caught stealing from garbage dumps were tortured or shot.

Fearing a prisoner revolt, a military official declared martial law in Chicago, and civilians, including a Chicago mayor and his family, were arrested, tried, and sentenced by a military court.

At the end of the Civil War, Camp Douglas closed, its buildings were demolished, and records were lost or destroyed. The exact number of dead is unknown; however, 6,000 Confederate soldiers incarcerated at Camp Douglas are buried among mayors and gangsters in a South Side cemetery. Camp Douglas: Chicago’s Civil War Prison explores a long-forgotten chapter of American history, clouded in mystery and largely forgotten.

Kelly Pucci writes for a variety of magazines, Web sites, and newspapers. As a native Chicagoan, she enjoys exploring local history and has written about Chicago’s ethnic restaurants, neighborhoods, and museums.