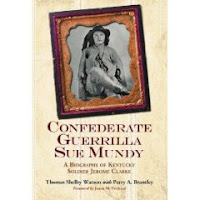 by Thomas S. Watson and Perry A. Brantley

From the publisher:
In 1864, George D. Prentice, editor of the pro-Union Louisville Daily Journal, created the persona of Sue Mundy, a Civil War guerrilla who was in actuality a young man named Marcellus Jerome Clarke.

This volume offers an in-depth, historically accurate account of Clarke's exploits in Kentucky during the Civil War. The work begins with a summary of Kentucky's prewar position: primarily pro-Union yet decidedly anti-Lincoln. The author then discusses the ways in which this paradox gave rise to the guerrilla threat that terrorized Kentuckians during the final years of the war.

Special emphasis is placed on previously unknown facts, names and deeds with dialogue taken directly from testimony in court-martial proceedings. While the main focus of the work is Clarke himself, other perpetrators of guerrilla warfare including William Clarke Quantrill, Sam Berry and Henry Magruder are also covered, as are guerrilla hunters Edwin Terrell and James Bridgewater. The last months of Quantrill's life in Kentucky and his final battle are discussed in detail. Previously unpublished photographs accompany this fascinating Civil War history.