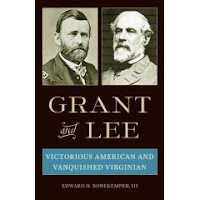 From the publisher:
Grant and Lee: Victorious American and Vanquished Virginian is a comprehensive, multi-theater, war-long comparison of the commanding general skills of Ulysses S. Grant and Robert E. Lee.

Unlike most analyses, Bonekemper clarifies the impact both generals had on the outcome of the Civil War - namely, the assistance that Lee provided to Grant by Lee's excessive casualties in Virginia, the consequent drain of Confederate resources from Grant's battlefronts, and Lee's refusal and delay of reinforcements to the combat areas where Grant was operating. The reader will be left astounded by the level of aggression both generals employed to secure victory for their respective causes, demonstrating that Grant was a national general whose tactics were consistent with achieving Union victory, whereas Lee's own priorities constantly undermined the Confederacy's chances of winning the war.

Building on the detailed accounts of both generals' major campaigns and battles, this book provides a detailed comparison of the primary military and personal traits of the two generals. That analysis supports the preface discussion and the chapter-by-chapter conclusions that Grant did what the North needed to do to win the war: be aggressive, eliminate enemy armies, and do so with minimal casualties (154,000), while Lee was too offensive for the undermanned Confederacy, suffered intolerable casualties (209,000), and allowed his obsession with the Commonwealth of Virginia to obscure the broader interests of the Confederacy. In addition, readers will find interest in the 18 clean-cut and lucid battle maps as well as a comprehensive set of appendices that describes the casualties incurred by each army, battle by battle.

"In this sequel to his Lee, Grant and McClellan books, Ed Bonekemper has created a controversial but compelling comparison of Grant and Lee. Although I have always been an admirer of Lee, this book sets forth a convincing case for Grant's superiority." - Ed Baldrige Professor of History, Emeritus, Muhlenberg College

"Instead of following the same old tired pattern comparing the generals during the Campaigns of 1864-65, Bonekemper follows the path each general took comparing and contrasting their successes and failures from the beginning of the Civil War to the outcome at Appomattox. Providing a rich resource of background data, footnotes, and references, data is summarized for the reader to draw his or her own conclusions. A must read for all who study these two generals." - Larry Jesse Clowers Ulysses S. Grant Living Historian Gettysburg, Pennsylvania

"Bonekemper throws the spotlight of rigorous scholarship on this riddle, and in doing so, illuminates the era and the men. Thoroughly exploring the details of their adverse relationship, Bonekemper makes a strong case that, indeed, the outcome of the war was attributable in large measure to their differences of temperament and contradictory approach to strategy and tactics. Bonekemper's very readable text plus a wealth of superb maps and illustrations makes this handsome book a must in every Civil War enthusiast's collection." - James L. MacDonald Great-Grandson of four Civil War Veterans

"Ed Bonekemper's "Grant and Lee: Victorious American and Vanquished Virginian" compares the generalship of Ulysses S. Grant and Robert E. Lee and draws what many might consider a heretical conclusion--that the victor was a better war leader than the loser. He ably backs up this conclusion with a detailed analysis of the war, featuring a groundbreaking study of wartime casualty statistics. This thorough, well- written and passionate look at our Civil War's two military icons should become a "must read" for students of the war." - Bruce Allardice Past president, CWRT of Chicago Author, "More Generals in Gray"

"The value of this book is that the history behind Grant and Lee reveals what it means to be a strategic commander. One general understood the total nature of war and the utility of force at a time when changes in weaponry, transport, and communications materially altered the course of the Civil War." - Dr. Jon R. Carleton, Department Chair, History & Military Studies Fellow, World Association of International Studies