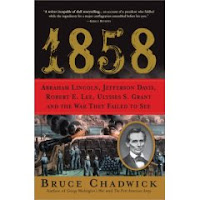 From the publisher:
1858 explores the events and personalities of the year that would send the Americas North and South on a collision course culminating in the slaughter of 630,000 of the nations young men, a greater number than died in any other American conflict. The record of that year is told in seven separate stories, each participant, though unaware, is linked to the oncoming tragedy by the central, though ineffective, figure of that time, the man in the White House, President James Buchanan.

The seven figures who suddenly leap onto historys stage and shape the great moments to come are: Jefferson Davis, who lived a life out of a Romantic novel, and who almost died from herpes simplex of the eye; the disgruntled Col. Robert E. Lee, who had to decide whether he would stay in the military or return to Virginia to run his familys plantation; William Tecumseh Sherman, one of the great Union generals, who had been reduced to running a roadside food stand in Kansas; the uprising of eight abolitionists in Oberlin, Ohio, who freed a slave apprehended by slave catchers, and set off a fiery debate across America; a dramatic speech by New York Senator William Seward in Rochester, which foreshadowed the civil war and which seemed to solidify his hold on the 1860 Republican Presidential nomination; John Browns raid on a plantation in Missouri, where he freed several slaves, and marched them eleven hundred miles to Canada, to be followed a year later by his catastrophic attack on Harpers Ferry; and finally, Illinois Senator Steven Douglas seven historic debates with little-known Abraham Lincoln in the Illinois Senate race, that would help bring the ambitious and determined Lincoln to the Presidency of the United States.

As these stories unfold, the reader learns how the country reluctantly stumbled towards that moment in April 1861 when the Southern army opened fire on Fort Sumter.

Former journalist Chadwick (The General and Mrs. Washington) deals with much more than the previously underappreciated year of 1858 in this engagingly written book. By focusing on the men who drove crucial historical events, Chadwick provides plenty of pre-1858 background to make his case that the events of that year changed the lives of dozens of important people and within a few short years, the history of the nation. - Publishers Weekly