A Confederate Legend: Berry Benson in War and Peace 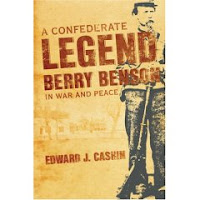 From the publisher:
If anyone can be said to have lived his life as a legend, it was Berry Benson. As a lad growing up in Hamburg, South Carolina, and Augusta, Georgia., he loved the nearby ponds and woods, and read stories of adventure. Part poet, part warrior, he viewed the Civil War as the supreme adventure. He measured himself against men who seemed to him to personify the chivalric ideals he had read about. His exploits became the stuff of legend.

On a night scout behind enemy lines, he stole a colonel’s horse from in front of the colonel’s tent. Captured twice on these scouting forays, he escaped twice, the second time by an impossibly long and meandering tunnel out of the infamous Elmira Prison. On his return through enemy lines, he climbed atop a cattle train and chatted companionably with a Union soldier. He declined to surrender at Appomattox,and brought his rifle home with him.

Because he lived up to his highest ideals during the war,he devoted his post-war career to worthy causes. He tried to save the besieged black militiamen from being killed by an angry white crowd. He sided with the textile strikers, even though he worked for the local mills as an accountant. He braved intense anti-Semitism in an attempt to save the life of Jewish Leo Frank.

When the Ladies Memorial Association needed a model for the Confederate soldier atop the lofty monument on Augusta’s main thoroughfare, they chose Berry Benson. His image, like those of the four Confederate generals below him, represent another legend, that of the Lost Cause.

EDWARD J. CASHIN†, a native of Augusta and a graduate of Fordham University, focused most of his research on topics relating to Georgia and the Southeast. His twenty-some books include The Kings Ranger: Thomas Brown and the American Revolution on the Southern Frontier, Lachlan McGillivray, Indian Trader, and the Shaping of the Southern Colonial Frontier, and William Bartram and the American Revolution on the SouthernFrontier. He retired as chairman of the History department at Augusta State University in 1996 to become director of the Center for the Study of Georgia History until his death in 2007.

From CWBN:
The exact day of release for this April title is unknown.