Slavery and the Peculiar Solution: A History of the American Colonization Society 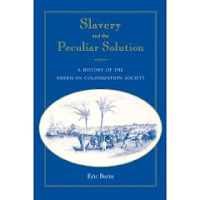 From the publisher:
"An exceptional work that will stand for years as the best study of the African colonization movement. Burin's insights into this often misunderstood idea will be appreciated by all historians of the early national era. The research, both archival and secondary, is excellent."--Douglas Egerton, Le Moyne College

"Burin adds significantly to our understanding of the world view of slaveholding colonizationists, of their negotiations with prospectively freed people, and of their struggle with proslavery critics of colonization. . . . Historians of proslavery thought will find new ideas and information here."--Torrey Stephen Whitman, Mount St. Mary’s College

From the early 1700s through the late 1800s, many whites advocated removing blacks from America. The American Colonization Society (ACS) epitomized this desire to deport black people. Founded in 1816, the ACS championed the repatriation of black Americans to Liberia in West Africa. Supported by James Madison, James Monroe, Henry Clay, and other notables, the ACS sent thousands of black emigrants to Liberia. In examining the ACS’s activities in America and Africa, Eric Burin assesses the organization’s impact on slavery and race relations.

Burin focuses on ACS manumissions—that is, instances wherein slaves were freed on the condition that they go to Liberia. In doing so, he provides the first account of the ACS that covers the entire South throughout the antebellum era. He investigates everyone involved in the society’s affairs, from the emancipators and freedpersons at the center to the colonization agents, free blacks, southern jurists, newspaper editors, neighboring whites, proslavery ideologues, northern colonizationists, and abolitionists on the periphery. In mixing a panoramic view of ACS operations with close-ups on individual participants, Burin presents a unique, bifocal perspective on the ACS.

Although colonization leaders initially envisioned their program as a pacific enterprise, in reality the push-and-pull among emancipators, freedpersons, and others rendered ACS manumissions logistically complex, financially troublesome, legally complicated, and at times socially disruptive enterprises. Like pebbles dropped in water, ACS manumissions rippled outward, destabilizing slavery in their wake. Based on extensive archival research and a database of 11,000 ACS emigrants, Burin’s study offers new insights concerning the origins, intentions, activities, and fate of the colonization movement.

Eric Burin is assistant professor of history at the University of North Dakota.