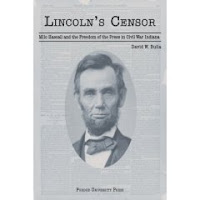 From the publisher:
Lincoln's Censor examines the effect of government suppression on the Democratic press in Indiana during the spring of 1863.

Indiana's Democratic newspaper editors were subject to Milo S. Hascalls General Order No. 9, which proclaimed that all newspaper editors and public speakers that encouraged resistance to the draft or any other war measure would be treated as traitors.

Brigadier General Hascall, commander of the District of Indiana, was amplifying General Order No. 38 of Major General Ambrose Everts Burnside, the commander of the Department of the Ohio. Burnside's order declared that criticism of the president and the war effort was tantamount to declaring sympathies with the enemy. Throughout the war in Indiana, Union soldiers and/or Republican activists intimidated other Democratic editors, ransacking their offices and sometimes running them out of business. President Abraham Lincoln, who suspended the writ of habeas corpus in 1862, claiming presidential prerogatives given by the Constitution at times of invasion or rebellion, had some political misgivings about the intimidation of Democratic newspapers, but let the practice continue in Indiana from April through June of 1863. Finally, at the request of Indiana Governor Oliver P. Morton, Lincoln's War Department ordered Burnside to relieve Hascall of his command. Bulla's observation about the sustainability of the free press in times of war have implications in todays world.