African-American Activism before the Civil War: A Reader on the Freedom Struggle in the Antebellum North 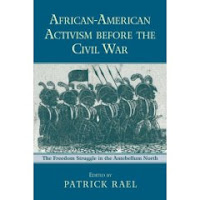 From the publisher:
Historians have long understood that racial oppression in American history was about more than slavery. On the eve of the Civil War, over five per cent of the nation's 4.5 million African Americans lived outside of bondage in the nominally 'free' states of the Union. These African Americans exercised a power in national discussions over slavery that far outstripped their number in the population. Their efforts at community building and radical protest were one force that helped bring the nation to the brink of Civil War, and ultimately led to the extinction of slavery.

African-American Activism before the Civil War is the first to gather together scholarly essays published from 1965 to the present on the role of African Americans and race in the struggle for equality in the northern states before the Civil War. Many of these essays are already known as classics in the field, and others are well on their way to becoming definitive in a still evolving field. Here, in one place, anchored by a comprehensive, analytical introduction discussing the historiography of antebellum black activism, the best scholarship on this crucial minority of African American activists can now be studied together.