Causes Won, Lost, and Forgotten: How Hollywood and Popular Art Shape What We Know about the Civil War 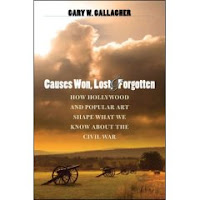 From the publisher:
More than 60,000 books have been published on the Civil War. Most Americans, though, get their ideas about the war—why it was fought, what was won, what was lost—not from books but from movies, television, and other popular media. In an engaging and accessible survey, renowned Civil War historian Gary Gallagher guides readers through the stories told in recent film and art, showing how they have both reflected and influenced the political, social, and racial currents of their times. Too often these popular portrayals overlook many of the very ideas that motivated the generation that fought the war. The most influential perspective for the Civil War generation, says Gallagher, is almost entirely absent from the Civil War stories being told today.

Gallagher argues that popular understandings of the war have been shaped by four traditions that arose in the nineteenth century and continue to the present: the Lost Cause, in which Confederates are seen as having waged an admirable struggle against hopeless odds; the Union Cause, which frames the war as an effort to maintain a viable republic in the face of secessionist actions; the Emancipation Cause, in which the war is viewed as a struggle to liberate 4 million slaves and eliminate a cancerous influence on American society; and the Reconciliation Cause, which represents attempts by northern and southern whites to extol "American" virtues and mute the role of African Americans.

Gallagher traces an arc of cinematic interpretation from one once dominated by the Lost Cause to one now celebrating Emancipation and, to a lesser degree, Reconciliation. In contrast, the market for art among contemporary Civil War enthusiasts reflects an overwhelming Lost Cause bent. Neither film nor art provides sympathetic representations of the Union Cause, which, Gallagher argues, carried the most weight in the Civil War era.

This lively investigation into what popular entertainment teaches us and what it reflects about us will prompt readers to consider how we form opinions on current matters of debate, such as the use of the military, the freedom of dissent, and the flying of the Confederate flag.

Gary W. Gallagher is John L. Nau III Professor of History at the University of Virginia and author or editor of numerous books, including Lee and His Army in Confederate History and The Shenandoah Valley Campaign of 1864.