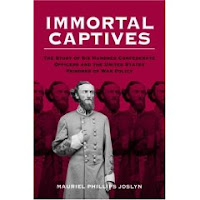 From the publisher:
“Some of the boys had no blankets, and we all slept on bare boards. It was so cold that the boys who had no blankets had to walk all night to keep from freezing . . . It seems to me that I can hear those poor fellows yet—walking, walking up and down on that brick floor.” — Maj. David B. Coulter, Twelfth Arkansas Infantry

Through the private letters, written testimonies, and journal entries of hundreds of Confederate officers, Mauriel Phillips Joslyn provides a moving and heartbreaking account of the six hundred Confederate soldiers who suffered in Union custody. After Lincoln and his war council dissolved the prisoner exchange program in 1864, the North used captured officers from all states in the seceded South to set an example to the remaining Confederacy.

Malnutrition and vitamin deficiencies took a terrible toll, and the officers, who were denied medical care, slowly starved during the hard winter months. After a rumor that Yankee soldiers were shot by their own army, the Union deliberately placed fifty Confederate prisoners in a stockade at Charleston Harbor. Forced under the artillery fire of their own comrades, these Southern heroes suffered mercilessly and unjustly in Northern hands. The last of the surviving six hundred Confederate officers were not released until several months after the end of the Civil War.

Mauriel Phillips Joslyn was born in Manchester, Georgia, and earned undergraduate and graduate degrees in history. While living in Virginia, Joslyn and her family participated in numerous Civil War reenactments. She also lectures and gives presentations on military history while dressed in full Confederate costume. Joslyn is the author of Confederate Women, published by Pelican, and has been published in Gettysburg Magazine, Military Heritage, Georgia Journal, and Irish Sword. She lives in Sparta, Georgia, where she and her family restored their 182-year-old home.