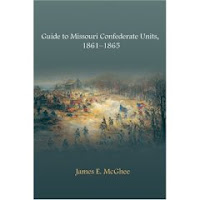 From the publisher:
Tracing the origins and history of Missouri Confederate units that served during the Civil War is nearly as difficult as comprehending the diverse politics that produced them.

Deeply torn by the issues that caused the conflict, some Missourians chose sides enthusiastically, others reluctantly, while a number had to choose out of sheer necessity, for fence straddling held no sway in the state after the fighting began.

The several thousand that sided with the Confederacy formed a variety of military organizations, some earning reputations for hard fighting exceeded by few other states, North or South. Unfortunately, the records of Missouri's Confederate units have not been adequately preserved--officially or otherwise--until now.

James E. McGhee is a highly respected and widely published authority on the Civil War in Missouri; the scope of this book is startling, the depth of detail gratifying, its reliability undeniable, and the unit narratives highly readable.

McGhee presents accounts of the sixty-nine artillery, cavalry, and infantry units in the state, as well as their precedent units, and those that failed to complete their organization. Relying heavily on primary sources, such as rosters, official reports, order books, letters, diaries, and memoirs, he weaves diverse materials into concise narratives of each of Missouri's Confederate organizations. He lists the field-grade officers for battalions and regiments, companies and company commanders, and places of origin for each company when known.

In addition to listing all the commanding officers in each unit, he includes a bibliography germane to the unit, while a supplemental bibliography provides the other sources used in preparing this unique and comprehensive resource.