The Class of 1861: Custer, Ames, and Their Classmates after West Point 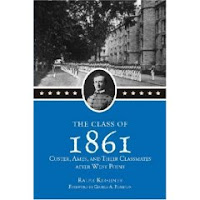 From the publisher:
Ralph Kirshner has provided a richly illustrated forum to enable the West Point class of 1861 to write its own autobiography. Through letters, journals, and published accounts, George Armstrong Custer, Adelbert Ames, and their classmates tell in their own words of their Civil War battles and varied careers after the war.

“Ralph Kirshner captures the exciting and thought-provoking stories of selected classmates as their character is tested in the fiery crucible of the Civil War. Equally important is the attention given to certain of the classmates’ postwar careers as politicians, soldiers, explorers, diplomats, and engineers.” — Edwin Bearss, Historian Emeritus, National Park Service

From CWBN:
This is the first paperback edition of a hardcover book. We were not aware of it in February when it was released.