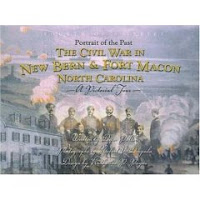 From the publisher:
This book describes the period after capturing Confederate positions on Hatteras Island and Roanoke Island, when the loyal Union soldiers directed their attention to the town of New Bern, located on North Carolina's mainland. As a strategically important port of Neuse River, New Bern also served as a railroad centre -- meaning that its capture could allow the Union forces to control territory near the major supply line for Robert E. Lee's Army of Northern Virginia. New Bern's Confederate forces were understaffed and inadequately prepared to face the Federal assault. The fall of New Bern enabled Union forces to proceed to the small coastal town of Beaufort and lay siege to Fort Macon, thus confirming New Bern's infamous place in history.

From CWBN:
This book is carried in Britain, Canada and New Zealand with a publication date of November 2007 and given an "out of stock" status. Stateside, Amazon shows it being published on 30 March 2008 while Barnes & Noble do not list it at all. The title appears in a picture-oriented North Carolina series.