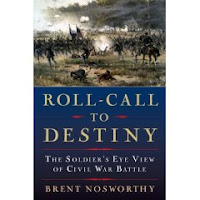 From CWBN:
Roll Call to Destiny puts readers on the frontlines of the Civil War by providing the point of view of small bands of men who braved unique combat situations. Acclaimed military historian Brent Nosworthy answers such questions as what it was like for artillery to beat back an aggressive infantry assault or to take part in a fast-paced cavalry charge, and how Civil War infantry conflict was waged in thick, forest foliage. From firsthand accounts, Nosworthy has pieced together Burnside's infantry at Bull Run (infantry-versus-infantry on the open field), the Fifty-Seventh New York at Fair Oaks (fighting in the woods), Daniel Webster's section at Arkansas Post (artillery attacking a fort), the third day at Gettysburg (cavalry-versus-cavalry), plus much more.

A must-read for anyone who wants to know what Confederate and Union soldiers saw, heard, and felt, as well as how they acted at critical moments of the Civil War.