Beneath a Northern Sky: A Short History of the Gettysburg Campaign 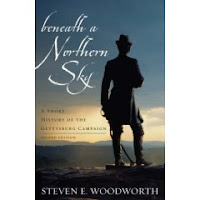 From the publisher:
Of all the places and events in this nation's history, Gettysburg may well be the name best known to Americans. In Beneath a Northern Sky, eminent Civil War historian Steven E. Woodworth offers a balanced and thorough overview of the entire battle, its drama, and its meaning. From Lee's decision to take his heretofore successful Army of Northern Virginia across the Potomac and into Pennsylvania to the withdrawal of the battle-battered Confederate's back across the river into Virginia, Woodworth paints a vivid picture of this pivotal campaign. Instead of focusing on only one aspect of the Gettysburg Campaign as most other books do, Beneath a Northern Sky tells the tale of the entire battle in a richly detailed but swiftly moving narrative. This new approach to a defining battle is sure to fascinate Civil War buffs and all those interested in the rich history of the United States.

The volume is illustrated with b&w photographs and diagrams of the battle. Woodworth teaches history at Texas Christian University.

For those with time to read only one book about Gettysburg, this is the one.
- James M. McPherson