Jewel of Liberty: Abraham Lincoln's Re-election and the End of Slavery 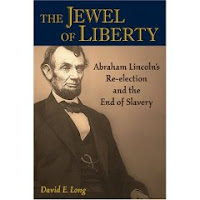 From the publisher:
The Jewel of Liberty marks a milestone in Civil War and Lincoln history, combining in-depth research with challenging new arguments to present the case for the election of 1864--which returned Lincoln to office to continue the war and cemented emancipation--as the most important in American history. Had Lincoln lost, the Confederacy might have achieved its two main goals: independence as a nation and the perpetuation of slavery. Never in our past has the nature and future of the nation depended so much on the ballot box.

David E. Long holds J.D. and Ph.D. degrees and is a professor of history at East Carolina University. His articles have appeared in Civil War Times Illustrated, Journal of Southern History, and other publications. In 2001 he provided commentary for the PBS miniseries Abraham and Mary Lincoln.

From the publisher:
This splendid book is the best account of Northern politics during the Civil War to hae appeared in years. -- James M. McPherson, Pulitzer Prize-winning author of Battle Day of Freedom

The Jewel of Liberty is the most important study of Lincoln and the Civil War to appear in more than a decade. -- Stephen B. Oates, author of Abraham Lincoln