The Day Freedom Died: The Colfax Massacre, the Supreme Court, and the Betrayal of Reconstruction 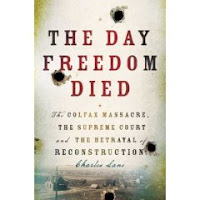 From the publisher:
The untold story of the slaying of a Southern town’s ex-slaves and a white lawyer’s historic battle to bring the perpretators to justice

Following the Civil War, Colfax, Louisiana, was a town, like many, where African Americans and whites mingled uneasily. But on April 13, 1873, a small army of white ex–Confederate soldiers, enraged after attempts by freedmen to assert their new rights, killed more than sixty African Americans who had occupied a courthouse. With skill and tenacity, The Washington Post’s Charles Lane transforms this nearly forgotten incident into a riveting historical saga.

Seeking justice for the slain, one brave U.S. attorney, James Beckwith, risked his life and career to investigate and punish the perpetrators—but they all went free. What followed was a series of courtroom dramas that culminated at the Supreme Court, where the justices’ verdict compromised the victories of the Civil War and left Southern blacks at the mercy of violent whites for generations. The Day Freedom Died is an electrifying piece of historical detective work that captures a gallery of characters from presidents to townspeople, and re-creates the bloody days of Reconstruction, when the often brutal struggle for equality moved from the battlefield into communities across the nation.

“One of the most memorable opening lines in English literature, from Ford Maddox Ford's novel The Good Soldier, is: ‘This is the saddest story I have ever heard.’ That could be the epigraph for Charles Lane's shattering account of the post-Civil War betrayal of African Americans and the bloody collapse of Reconstruction.” — George F. Will