Weary of War: Life on the Confederate Home Front 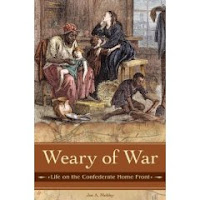 by Joe A. Mobley

From CWBN:
Providing a fresh look at a crucial aspect of the American Civil War, this new study explores the day-to-day life of people in the Confederate States of America as they struggled to cope with a crisis that spared no one, military or civilian. Mobley touches on the experiences of everyone on the home front-white and black, male and female, rich and poor, young and old, native and foreign born. He looks at health, agriculture, industry, transportation, refugees city life, religion, education, culture families, personal relationships, and public welfare. In so doing, he offers his perspective on how much the "will of the people" contributed to the final defeat of the Southern cause. Although no single experience was common to all Southerners, a great many suffered poverty, dislocation, and heartbreak. For African Americans, however, the war brought liberation from slavery and the promise of a new life. White women, too, saw their lives transformed as wartime challenges gave them new responsibilities and experiences. Mobley explains how the Confederate military draft, heavy taxes, and restrictions on personal freedoms led to widespread dissatisfaction and cries for peace among Southern folk. He describes the Confederacy as a region of divided loyalties, where pro-Union and pro-Confederate neighbors sometimes clashed violently. This readable, one-volume account of life "behind the lines" will prove particularly useful for students of the conflict.

JOE A. MOBLEY is a former historian and administrator with the North Carolina Office of Archives and History. He currently teaches in the Department of History at North Carolina State University, Raleigh. He is the author of a number of books, articles, and book reviews.

From CWBN:
We missed the release of this date on February 28.