The Encyclopedia of Civil War Medicine 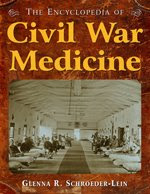 From the publisher:
The story of Civil War medicine--the staggering challenge of treating wounds and disease on both sides of the conflict--is one of the most compelling aspects of the war. Written for general readers and scholars alike, this first-of-its kind encyclopedia will help all Civil War enthusiasts to better understand this amazing medical saga.

Presented in A-Z format with more than 200 entries, the encyclopedia treats both Union and Confederate material in a balanced way. Its many user-friendly features include a chronology, a glossary, cross-references, and a bibliography for further study.