Raising Freedom's Child: Black Children and Visions of the Future After Slavery 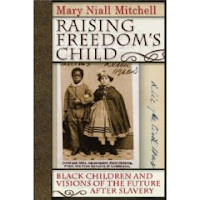 From CWBN:
”Mitchell's sophisticated, nuanced reading of a wealth of previously untapped documents and period photographs casts a dazzling fresh light on the way that abolitionists, educators, missionaries, planters, politicians, and free children of color envisioned the status of African Americans after emancipation.” — Steven Mintz, University of Houston

“Raising Freedom’s Child demonstrates the importance of childhood studies for understanding the nation’s political, economic, and social history. In this carefully researched book, Mitchell keeps the black child at the center of the struggle to define freedom in the aftermath of Civil War and emancipation.” — Marie Jenkins Schwartz, University of Rhode Island

The end of slavery in the United States inspired conflicting visions of the future for all Americans in the nineteenth century, black and white, slave and free. The black child became a figure upon which people projected their hopes and fears about slavery’s abolition. As a member of the first generation of African Americans to grow up in freedom, the black child — freedom’s child — connoted a future where African Americans might enjoy the same privileges as whites: landownership, equality, autonomy. Yet this image was a nightmare for most white southerners. Even many northerners expressed doubts about the consequences of abolition for the nation and its identity as a “white” republic.

From the 1850s and the Civil War to emancipation and the official end of Reconstruction in 1877, Raising Freedom’s Child examines slave emancipation and opposition to it as a far-reaching, national event with profound social, political, and cultural consequences. Mary Niall Mitchell analyzes a dizzying array of representations of the black child—letters, photographs, newspaper columns, court cases, and more—to illustrate how Americans contested and defended slavery, tracing sharp debates over black children’s education, labor, racial classification, and citizenship. Only with the triumph of segregation in public schools in 1877 did the black child lose its public role in the national struggle over civil rights, a role it would not play again until the 1950s.