Causes of the Civil War: The Political, Cultural, Economic and Territorial Disputes Between the North and South 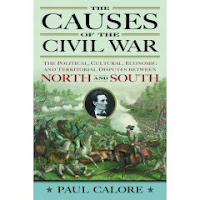 Increasing moral conflicts over the issue of slavery and constant political debates regarding its existence—exacerbated by the inequities inherent between an established agricultural society and a growing industrial one—led to a fierce sectionalism which manifested itself through cultural, economic, political and territorial disputes.

This volume reduces sectionalism to its most fundamental form, examining the underlying source of this antagonistic climate. From protective tariffs to the expansionist agenda, it illustrates the ways in which the foremost issues of the time influenced relations between the North and the South. State sovereignty and the interpretation of congressional and constitutional powers play major parts in this concise narrative on the antebellum politics that inadvertently nurtured the growth of sectional conflicts and contributed to the inevitability of war.

Paul Calore was an operations branch chief with the Defense Logistics Agency of the Department of Defense before retiring. In addition to writing on the causes of the Civil War, he has written books about its naval and land campaigns. He is a supporting member of the U.S. Civil War Center and the Civil War Preservation Trust, and lives in Seekonk, Massachusetts.