Trench Warfare under Grant and Lee: Field Fortifications in the Overland Campaign 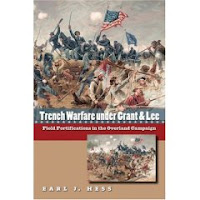 From the publisher:
Here in the study of field fortifications he began in Field Armies and Fortifications in the Civil War, Earl J. Hess turns to the 1864 Overland campaign to cover battles from the Wilderness to Cold Harbor. A grueling form of trench warfare became a key feature of tactical operations during this phase of the war in Virginia

Drawing on meticulous research in primary sources and careful examination of trench remnants at the Wilderness, Spotsylvania, North Anna, Cold Harbor, and Bermuda Hundred, Hess describes Union and Confederate earthworks and how Grant and Lee used them in this new era of field entrenchments. According to Hess, the heavy reliance on earthworks by both armies in the Overland campaign was driven by Grant's relentless attacks against Lee, not by the widespread use of rifle muskets, as historians have previously argued. Entrenchments kept the armies within striking distance and compelled soldiers to dig in for protection. Despite suffering massive casualties, Grant seized control of the strategic initiative and retained it for the rest of the war in the eastern theater.

Illustrated by rare, historic photographs and new detailed maps of the trench remnants, this book constitutes the second installment of a three-volume study of field fortifications in the eastern campaigns.

Earl J. Hess is Stewart W. McClelland Chair in History at Lincoln Memorial University in Harrogate, Tennessee. He is author or editor of nine other books, including Field Armies and Fortifications in the Civil War: The Eastern Campaigns, 1861-1864 (from the University of North Carolina Press).