The Jones-Imboden Raid: The Confederate Attempt to Destroy the Baltimore & Ohio Railroad and Retake West Virginia 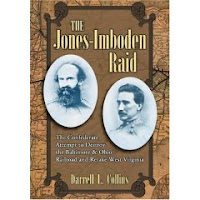 From the publisher:
When Virginia seceded from the United States in 1861, its western counties showed very little popular support for the Confederacy, and loyalist bands of bushwhackers, partisans and guerillas drove most Southern sympathizers from the region.

Most inconvenient for the Confederacy was the fact that these counties (which later would become West Virginia) housed the Baltimore and Ohio Railroad, which connected Washington with the Midwest's vast wealth of manpower and supplies. This work covers the Confederacy's 1863 attempt to invade West Virginia and destroy the critical B&O line.

From CWBN:
The exact day of release for this September title is unknown. Amazon mistakenly gives it as July 31.