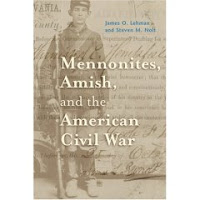 From the publisher:
"The first serious, comprehensive study of this important and neglected subject. A well researched and carefully argued treatment that reminds us that not all churches fell into lockstep support for either the Union or the Confederacy." -- George C. Rable, University of Alabama, author of Fredericksburg! Fredericksburg, winner of the Lincoln Prize

During the American Civil War, the Mennonites and Amish faced moral dilemmas that tested the very core of their faith. How could they oppose both slavery and the war to end it? How could they remain outside the conflict without entering the American mainstream to secure legal conscientious objector status? In the North, living this ethical paradox marked them as ambivalent participants to the Union cause; in the South, it marked them as clear traitors.

In the first scholarly treatment of pacifism during the Civil War, two experts in Anabaptist studies explore the important role of sectarian religion in the conflict and the effects of wartime Americanization on these religious communities. James O. Lehman and Steven M. Nolt describe the various strategies used by religious groups who struggled to come to terms with the American mainstream without sacrificing religious values -- some opted for greater political engagement, others chose apolitical withdrawal, and some individuals renounced their faith and entered the fight.

Integrating the most recent Civil War scholarship with little-known primary sources and new information from Pennsylvania and Virginia to Illinois and Iowa, Lehman and Nolt provide the definitive account of the Anabaptist experience during the bloodiest war in American history