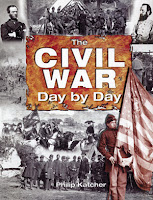 From the publisher:
The bloodiest conflict in U.S. history--claiming over 600,000 lives--was also one of the most complex. This handy chronology of the Civil War allows readers to follow the conflict from opening salvo to Appomattox and to grasp at a glance the order and intricacies of all the key developments, from battles on land and sea to political maneuvers North and South. Principal commanders and political figures, key technology, transportation, and weaponry, all receive due treatment. The Civil War Day by Day goes beyond the major engagements of the war to cover lesser episodes and partisan activities (like Mosbys and Quantrills), providing a reference that is at once fingertip-quick and comprehensive--and an incomparable resource on this critical chapter in American history.

About the series:
Answering the constant need for efficient shelf reference volumes on the major topics from world history, the Brassey's Almancs will provide a cornucopia of facts and data that will satisfy the most demanding of researchers, historians, writers, battlefield visitors, wargamers and others needing information at their fingertips.

Dividing its theme into Reasons for the War, Chronology, The Leading Participants, The Combatant Forces, Weapons and Equipment, and Aids to Further Study, each title will include reference to websites, films and videos as well as basic data on the leading characters, weaponry and the prominent events of the conflict.

Relevant photographs and maps, plus extensive indexing will provide added value. Its Civil War changed America before it evolved into the world's first lone superpower; it is studied worldwide for its military and political significance.

This is the first Brassey's Almanac title. A volume on The Peninsular War is also in preparation.

From CWBN:
We find the page allocation - 192 pp - suspiciously low for a "comprehensive" chronology.