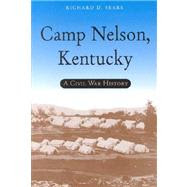 From the publisher:
Camp Nelson, Kentucky, was designed in 1863 as a military supply depot for the Union Army. Later it became one of the country’s most important recruiting stations and training camps for black soldiers and Kentucky’s chief center for issuing emancipation papers to former slaves.

Richard D. Sears tells the story of the rise and fall of the camp through the shifting perspective of a changing cast of characters—teachers, civilians, missionaries such as the Reverend John G. Fee, and fleeing slaves and enlisted blacks who describe their pitiless treatment at the hands of slave owners and Confederate sympathizers.

Sears fully documents the story of Camp Nelson through carefully selected military orders, letters, newspaper articles, and other correspondence, most inaccessible until now. His introduction provides a historical overview, and textual notes identify individuals and detail the course of events.