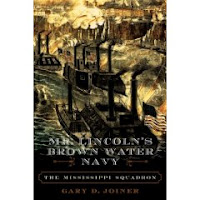 From the publisher:
The Union inland navy that became the Mississippi Squadron is one of the greatest, yet least studied aspects of the Civil War. Without it, however, the war in the West may not have been won, and the war in the East might have lasted much longer and perhaps ended differently. The men who formed and commanded this large fighting force have, with few exceptions, not been as thoroughly studied as their army counterparts.

The vessels they created were highly specialized craft which operated in the narrow confines of the Western rivers in places that could not otherwise receive fire support. Ironclads and gunboats protected army forces and convoyed much needed supplies to far-flung Federal forces. They patrolled thousands of miles of rivers and fought battles that were every bit as harrowing as land engagements yet inside iron monsters that created stifling heat with little ventilation. This book is about the intrepid men who fought under these conditions and the highly improvised boats in which they fought. The tactics their commanders developed were the basis for many later naval operations. Of equal importance were lessons learned about what not to do. The flag officers and admirals of the Mississippi Squadron wrote the rules for modern riverine warfare.

*Describes in great detail, the naval battles fought on western rivers and places the combined arms aspect of the war into clear focus.

*Details little known events and people and brings them alive in an easy to read style that will captivate scholars, students, and the general public alike.

*Includes a large number of pictures and maps, some never before published.

Gary Joiner is a military historian, cartographer, and author who developed a special interest in studying river channel migration and historic road networks while studying the Red River Campaign of the U.S. Civil War. He is the author of One Damn Blunder from Beginning to End:The Red River Campaign of 1864 (Scholarly Resources, 2003), which has won two national history book honors, the A.M. Pate, Jr. and the Albert Castel awards. His other recent books include—No Pardons to Ask, nor Apologies to Make; Through the Howling Wilderness: The Red River Campaign of 1864 and Union Defeat in the West; as senior editor, Little to Eat and Thin Mud to Drink, and as co-editor of O. Edward Cunningham's Shiloh and Western Campaign of 1862.