Disunion, War, Defeat, and Recovery in Alabama: The Journal of Augustus Benners, 1850-1885 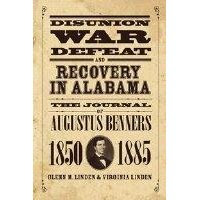 by Glenn and Virginia Linden (editors)

From the publisher:
Disunion, War, Defeat, and Recovery in Alabama offers a rare look into the life of a Civil War character many would say they love to hate: the plantation owner. A slave-owning, cotton grower, Augustus Benners recorded decades of his mostly gritty and unglamorous plantation life. Simultaneously, his entries unveil the self-portrait of a complex and troubled man. Struggling to meet the demands of family, farm, and community, Benners remained haunted by fear and self-doubt in his quest for peace and stability.

A devoted husband and father, Benners’s tragedy of loss is almost Shakespearean in scope. He touchingly recounts the deaths of dear ones: five children in the space of eleven years; his wife returning from Texas; and a long-time favorite hand (“he never referred to them as slaves”), Kit Jones, whose passing moved Benners to write “his place cannot be filled.”

How poignant we find Benners’s comment on slave-owning: “I could wish I had never seen a Negro and don’t in the least doubt I would have been more of a man if not a better one if I had never owned one.”

Deft editing, annotation, and explanatory notes by Glenn and Virginia Linden complement and elucidate Benners’s historical accounts. Just when you think you have this nineteenth-century Southern icon neatly stereotyped, the editors let Benners surprise you with revelations as to his spiritual side...his fascination with astronomy and roller skating...or one more rendition of his unflagging resentment toward Ulysses S. Grant.

GLENN M. LINDEN is associate professor of History at Southern Methodist University in Dallas, wherehe has taught since 1968. He has authored, edited, or co-edited seven books including three in the Civil War period—Voices from the Gathering Storm, the Coming of the Civil War; Voices from the House Divided, the United States Civil War as Personal Experience; and Voices from the Reconstruction Years, 1865–1877.

VIRGINIA LINDEN has a BA from the University of Washington and an MA in sculpture from New Mexico State University in Las Cruces, New Mexico. She has worked on eight books with Glenn editing and researching.