In the Footsteps of Grant and Lee: The Wilderness Through Cold Harbor 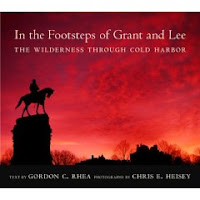 From the publisher:
In early May 1864, Lieutenant General Ulysses S. Grant initiated a drive through central Virginia to crush Robert E. Lee's Confederate Army of Northern Virginia. For forty days, the armies fought a grinding campaign from the Rapidan River to the James River that helped decide the course of the Civil War. Several of the war's bloodiest engagements occurred in this brief period: the Wilderness, Spotsylvania Court House, the North Anna River, Totopotomoy Creek, Bethesda Church, and Cold Harbor.

Pitting Grant and Lee against one another for the first time in the war, the Overland Campaign, as this series of battles and maneuvers came to be called, represents military history at its most intense. In the Footsteps of Grant and Lee, a unique blend of narrative and photographic journalism from Gordon C. Rhea, the foremost authority on the Overland Campaign, and Chris E. Heisey, a leading photographer of Civil War battlefields, provides a stunning, stirring account of this deadly game of wits and will between the Civil War's foremost military commanders.

Here Grant fought and maneuvered to flank Lee out of his heavily fortified earthworks. And here Lee demonstrated his genius as a defensive commander, countering Grant's every move. Adding to the melee were cavalry brawls among the likes of Philip H. Sheridan, George A. Custer, James Ewell Brown "Jeb" Stuart, and Wade Hampton. Forty days of combat produced horrific casualties, some 55,000 on the Union side and 35,000 on the Confederate. By the time Grant crossed the James and began the Siege of Petersburg, marking an end to this maneuver, both armies had sustained significant losses that dramatically reduced their numbers.

Rhea provides a rich, fast-paced narrative, movingly illustrated by more than sixty powerful color images from Heisey, who captures the many moods of these hallowed battlegrounds as they appear today. Heisey made scores of visits to the areas where Grant and Lee clashed, giving special attention to lesser-known sites on byways and private property. He captures some of central Virginia's most stunning landscapes, reminding us that though battlefields conjure visions of violence, death, and sorrow, they can also be places of beauty and contemplation. Accompanying the modern pictures are more than twenty contemporary photographs taken during the campaign or shortly afterwards, some of them never before published.

At once an engaging military history and a vivid pictorial journey, In the Footsteps of Grant and Lee offers a fresh vision of some of the country's most significant historic sites.

Gordon C. Rhea is the author of four books on the Overland Campaign: The Battle of the Wilderness, May 5-6, 1864; The Battles for Spotsylvania Court House and the Road to Yellow Tavern, May 7-12, 1864; To the North Anna River: Grant and Lee, May 13-25, 1864; and Cold Harbor: Grant and Lee, May 26-June 3, 1864. He is currently writing the fifth and concluding volume in the series. A frequent lecturer on military history and a practicing attorney, he lives in Mt. Pleasant, South Carolina, with his wife and two sons.

Chris E. Heisey is coauthor of Gettysburg: This Hallowed Ground. He is a photojournalist for the Roman Catholic Diocese in Harrisburg, Pennsylvania, and lives in Mechanicsburg with his wife and son.

From CWBN:
The exact day of release for this September title is unknown.