As If It Were Glory: Robert Beecham's Civil War from the Iron Brigade to the Black Regiments 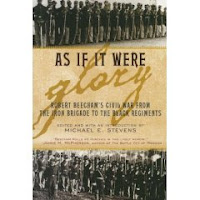 From the publisher:
Unlike most Civil War memoirs, As If It Were Glory does not romanticize the war--it recognizes the valor of the troops, but also the suffering and brutality of war. At the time of these writings, the war had already ended, and Robert Beecham reflects on what he did and the outcome of the war with an honest and intelligent eye. Beecham was also leader of a newly raised African-American unit, which he calls the best and bravest soldiers that ever lived.

Michael E. Stevens is state historian at the State Historical Society of Wisconsin and lives in Madison. He has written and edited several books on common men and women during war including "Letters From the Front, 1898-1945"; "Women Remember the War, 1941-1945"; "Remembering the Holocaust"; and "Voices from Vietnam".

From CWBN:
This is the paperback edition of an earlier hardback release.