War Like the Thunderbolt: The Battle and Burning of Atlanta 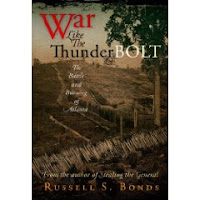 From the publisher:
This is a superbly written account of the battle for and burning of Atlanta during the American Civil War - the event made famous in the film "Gone with the Wind". In War Like the Thunderbolt, Russell Bonds presents the epic story of what one observer call 'The greatest event of the Civil War' - the struggle for the city of Atlanta. It was the conflict that secured the re-election of Abraham Lincoln, sealed the fate of the Confederacy, and set a precedent for military campaigns across the world. Based on new research into diaries, previously unpublished letters, newspapers, and other archival sources, this superb volume takes readers across the smoky battlefield and into the lives of fascinating characters, both the famous and the forgotten, including the diminutive young Benjamin Harrison, later to become 23rd President of the USA, and Carrie Berry, a gifted diarist who belied her ten years of age. Like its fictional counterpart, "Gone with the Wind", this volume presents a superbly written account and meticulous account of this momentous event in American history.

"Through the power of Margaret Mitchell's words and the film they inspired, the struggle for Atlanta became all that most folks needed to know about our nation's four-year bloodbath. Russell S. Bonds has courageously focused his sights on retelling the story in War Like The Thunderbolt: The Battle and Burning of Atlanta. Through the depth of his research and his skills as both historian and storyteller, Bonds has given us what might have seemed impossible--a fresh, new, and impressive look back at Atlanta." --Robert Hicks, author of the New York Times bestseller, The Widow of the South

"This gripping story of the battles for Atlanta in 1864 provides new insights on a campaign that ensured Lincoln's reelection and the ultimate destruction of the Confederacy. Russell S. Bonds has an impressive ability to combine combat narrative with shrewd analyses of commanders' performances." --James M. McPherson, author of Tried by War: Abraham Lincoln as Commander in Chief

From CWBN
A beautifully written narrative history. It is exactly what the Civil War nonfiction buyer is looking for. Bonds is careful in his research, artistic in his assembly of testimony, deliberate in his analysis, cautious in judgement, gentle with reputations, measured in his tempo, and interesting throughout.