Henry Wilson and the Era of Reconstruction 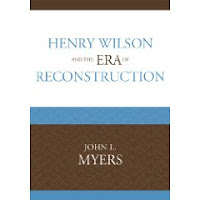 From the publisher:
Already a leader of the Republican party when the Civil War began, Henry Wilson had distinguished himself as the most important Congressional figure on military and antislavery and pro-black legislation during the war.

During the Era of Reconstruction, Wilson fought to protect the rights of the newly-freed slaves, but he was opposed to the severe punishment of Confederate leaders and initially tried to be conciliatory toward President Johnson's lenient policies. Soon Wilson joined others in promoting Congress's own Reconstruction program, including the 14th and 15th Amendments, the Military Reconstruction Acts, and the impeachment of the President.

He became the Republican Party's most frequently-used campaign speaker. Long recognized as a spokesman for labor, he was also the foremost national politician promoting the cause of prohibition. He wrote the most authoritative three-volume work on the causes of the Civil War from the northern viewpoint. He was also a frequent contributor to the era's most influential religious periodical. In 1872, Wilson was rewarded for his political activities when he was nominated and elected as the country's vice-president.

John L. Myers is emeritus professor of history, State University of New York, Plattsburgh. He has previously published Henry Wilson and the Coming of the Civil War (University Press of America, 2005) and Senator Henry Wilson and the Civil War (University Press of America, 2008). He has written a large number of articles dealing with the antislavery agents of the 1830s. He received his Ph.D. from the University of Michigan.