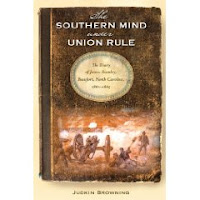 From the publisher:
James Rumley was nearly fifty years old when the Civil War reached the remote outer banks community of Beaufort, North Carolina. Comfortably employed as clerk of the Superior Court of Carteret County, he could only watch as a Union fleet commanded by General Ambrose Burnside snaked its way up the Neuse River in March 1862 and took control of the area.

In response to laws enacted by occupying forces, Rumley took the Oath of Allegiance, stood aside as his beloved courthouse was used for pro-Union rallies, and watched helplessly as friends and neighbors had their property seized and taken away. In public, Rumley appeared calm and cooperative, but behind closed doors he poured all his horror, disgust, and outrage into his diary.

Safely hidden from the view of military authority, he explained in rational terms how his pledge of allegiance to the invading forces was not morally binding and expressed his endless worry over seeing former slaves emancipated and empowered. This constantly surprising diary provides a rare window onto the mind of a Confederate sympathizer under the rule of what he considered to be an alien, unlawful, and "pestilent" power.