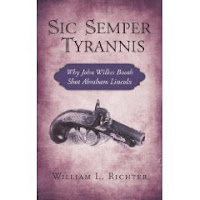 From the publisher:
From Richard Lawrence to John Wilkes Booth to John Hinckley, Jr., Americans have preferred their presidential assassins, whether failed or successful, to be more or less crazy. Seemingly, this absolves us of having to wonder where the American experiment might have gone wrong.

John Wilkes Booth has been no exception to this rule. But was he?

In a new, provocative study comprising three essays, historian William L. Richter delves into the psyche of Booth and finds him far from insane. Beginning with a modern, less adulating interpretation of President Abraham Lincoln, Richter is the first scholar to examine Booth's few known, often unfinished speeches and essays to draw a realistic mind-picture of the man who intensely believed in common American political theories of his day, and acted violently to carry them out during the time of America's greatest war.