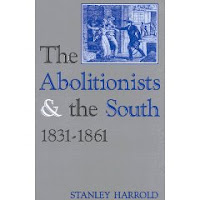 From the publisher:
Within the American antislavery movement, abolitionists were distinct from others in the movement in advocating, on the basis of moral principle, the immediate emancipation of slaves and equal rights for black people.

Instead of focusing on the "immediatists" as products of northern culture, as many previous historians have done, Stanley Harrold examines their involvement with antislavery action in the South--particularly in the region that bordered the free states. How, he asks, did antislavery action in the South help shape abolitionist beliefs and policies in the period leading up to the Civil War?

Harrold explores the interaction of northern abolitionist, southern white emancipators, and southern black liberators in fostering a continuing antislavery focus on the South, and integrates southern antislavery action into an understanding of abolitionist reform culture. He discusses the impact of abolitionist missionaries, who preached an antislavery gospel to the enslaved as well as to the free. Harrold also offers an assessment of the impact of such activities on the coming of the Civil War and Reconstruction.