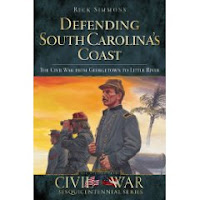 From the publisher:
In Defending South Carolina's Coast: The Civil War from Georgetown to Little River, area native Rick Simmons relates the often overlooked stories of the upper South Carolina coast during the Civil War.

As a base of operations for more than three thousand troops early in the war and the site of more than a dozen forts, almost every inch of the coast was affected by and hotly contested during the Civil War. From the skirmishes at Fort Randall in Little River and the repeated Union naval bombardments of Murrells Inlet to the unrealized potential of the massive fortifications at Battery White and the sinking of the USS Harvest Moon in Winyah Bay, the region's colorful Civil War history is unfolded here at last.