North By South: The Two Lives of Richard James Arnold 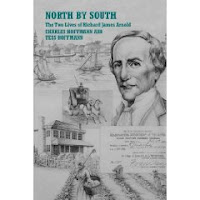 by Charles and Tess Hoffmann

From the publisher:
In 1823, Richard James Arnold, descendant of a Quaker family involved in the movement to abolish slavery in Rhode Island, married Louisa Gindrat of Bryan County, Georgia, and acquired a plantation called White Hall--thirteen hundred acres of rice and cotton land and sixty-eight slaves. Over the next fifty years, Arnold led two distinct, if never entirely separate lives, building through successive Georgia winters a profitable southern "paradise" rooted in human bondage, then returning each spring to his business interests and extended family in Rhode Island.
Organized around a surviving plantation journal kept during two winters and one spring, North by South encompasses Arnold's career as a rice and cotton planter as it uncovers the increasingly difficult social and moral disguises that enabled him to move freely through two worlds.

“North by South is an engrossing book. It makes a fresh and welcome contribution to the understanding of social and political history in the nineteenth century.”--Journal of Southern History

“A readily assimilated case-study that illustrates very graphically the flaws in the paternalistic planters’ view of slavery and the human contradictions, even in the North, of slave-ownership.”--Slavery and Abolition