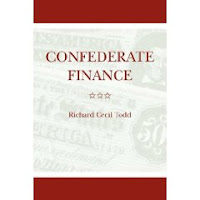 From the publisher:
Confederate Finance, first published in 1954, looks at the measures taken by the Confederacy to stabilize its currency and offer a basis for foreign exchange. By the end of the Civil War, the Confederacy had resorted to a number of financial expedients, including the most desperate of measures. The Confederate government seized the property of enemies, levied direct taxes, and placed duties on exports and imports. In addition, donations and gifts were gratefully accepted. All the while, treasury notes flooded the market, and loans were floated in an attempt to continue the Confederacy's existence.

Richard Cecil Todd shows how these measures were used by the Confederate government to meet its obligations at home and abroad. He also discusses the organization and personnel of the Confederate Treasury Department.