A Southern Spy in Northern Virginia: The Civil War Album of Laura Ratcliffe 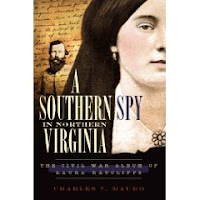 From the publisher:
As the Civil War raged, Confederate brigadier general J.E.B. Stuart entrusted a secret album to Laura Ratcliffe, a young girl in Fairfax County, 'as a token of his high appreciation of her patriotism, admiration of her virtues, and pledge of his lasting esteem.' A devoted Southerner, Laura provided a safe haven for Rebel forces, along with intelligence gathered from passing Union soldiers. Ratcliffe's book contains four poems and forty undated signatures: twenty-six of Confederate officers and soldiers and fourteen of loyal Confederate civilians.

In A Southern Spy in Northern Virginia, Charles V. Mauro uncovers the mystery behind this album, identifying who the soldiers were and when they could have signed its pages. The result is a fascinating look at the covert lives and relationships of civilians and soldiers during the war, kept hidden until now.